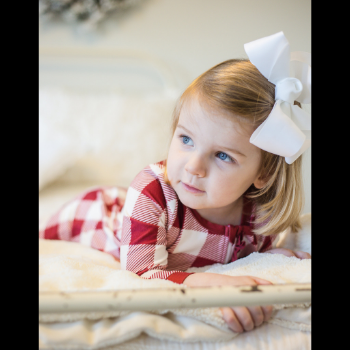 Afton was born Aug. 17th, 2015 weighing 8 lbs 12 oz – beautiful and perfect. When she was two days old, and 5 hours after leaving the hospital, Afton had an episode where she pushed away from me, went rigid, and turned blue. I wasn’t sure what was happening, but I was concerned. Two hours later she had a similar episode. I decided we needed to go straight to the ER. I remember I wasn’t shocked when the doctor said he believed she was having seizures. I was numb as I placed her into the clear box where they would load her into a helicopter for transport to the children’s hospital. We were in and out of the NICU for 10 days. Her seizures were controlled by the time she was 12 days old. We headed home believing she had a vitamin deficiency. When her seizures returned at 3 months old, further genetic testing was done and we learned of her KCNQ2 diagnosis.

One of the most difficult parts of having a child diagnosed with a rare genetic condition is that you feel alone. No one you know has ever heard of it. I have never met a medical professional during our appointments or hospital visits who had heard of it before.

Afton began having language and sensory regression around 2 years old and by that summer her seizures returned. It took us 4 months to regulate her meds and get the seizures under control again. We have delays across the board: language, social, fine motor, and cognitive. Life with my sweet Afton, now 3 yrs old, is not what I expected it to be. I worry about her future and how we can better help her develop.

However, we have been changed for the better too. My relationship with God has been strengthened. I have connected with so many wonderful people through our family groups. I also had so many new moms of KCNQ2 babies who would see pictures of Afton running and jumping and laughing. They would reach out wanting to know her background in hopes that their child had a shot at being as healthy as she is. This encouraged me to start our own family blog Little House in the Hill where I share our life activities as well as feelings and struggles of raising a child with special needs. So many people have reached out to tell me it makes them feel encouraged.

I feel it’s important to share our story so that more people will learn about KCNQ2 and all the special warriors that fight this battle every day. But I also share to offer encouragement to anyone who struggles with anything. You can always choose joy no matter what life throws at you. Never give up the fight!