KCNQ2: What’s in the Alphabet Soup? 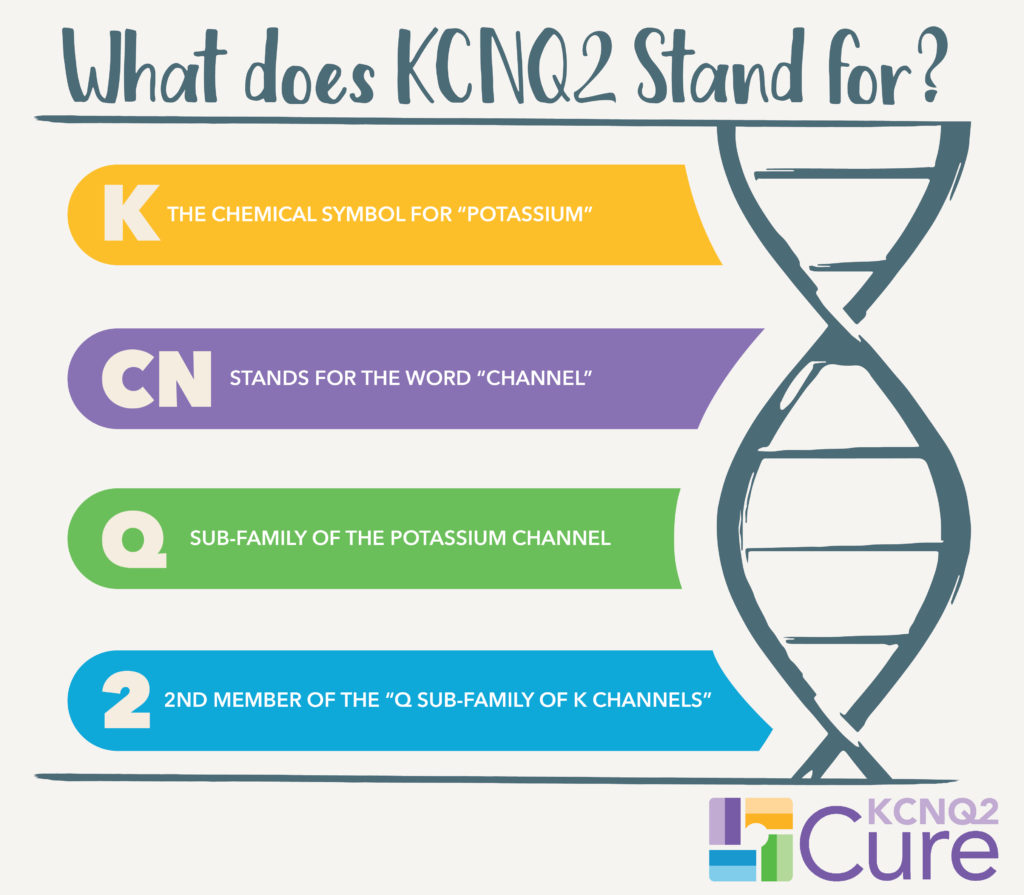 Experts have known for some time what the KCNQ2 gene does, and it was named accordingly – “K” for the scientific symbol for potassium, “CN” as an abbreviation for channel, and “Q2” for the subtype Q2. But even scientists only recently understood the wide range of different variations in the “source” of the mutations and in outcomes for affected patients.

The KCNQ2 mutation can come from a variety of sources. It can be inherited from an affected parent that has the mutation, it can be inherited from a parent who carries the mutation in some of his/her cells (called mosaicism) but does not display the severity symptoms that would expect to be caused by that mutation, or can be a new or random mutation (de novo) occurring for the first time in the affected patient.

The KCNQ2 mutation was first recognized by experts as the source of Benign Familial Neonatal Epilepsy (BFNE) in 1998. In the years prior to that, scientists had followed generations of families who had experienced seizures as infants, but that generally resolved and developed normally. These individuals went on to have children of their own, some of whom inherited the mutation in the KCNQ2 gene coding for this mild variation of the disease. Until recently, when doctors saw seizures in the first days of life, or when testing showed a KCNQ2 mutation, they assumed it was likely a benign seizure disorder, BFNE.

However, as experts studied more patients, they saw some children who were more severely affected than their parents and began to wonder why. In these cases, the parents had developed normally because only some of their cells carried the mutation (they were mosaic), but passed on the severe mutation from the subset of their cells that were affected. So, in these cases, even though the parent seems to have the benign form of KCNQ2, it is possible for them to have a child with the more significant symptoms of KCNQ2 encephalopathy. In 2011, experts began to realize that KCNQ2 mutations can also cause the more significant developmental delays and more lasting seizures associated with KCNQ2 encephalopathy.

With this knowledge and with greater availability of genetic testing, doctors have been able to identify more severely affected patients with KCNQ2 mutations, even when there is no family history. In fact, in the majority of the cases of KCNQ2 encephalopathy – mutations causing the more severe form of the disease – the mutation is not inherited, but is de novo, or “new”. This makes sense when you consider that a severely affected person is unlikely to have offspring, so the specific variants that cause a severe outcome are not usually passed down through a family (unless only some cells are affected, as in the mosaic cases discussed above). Now that genetic testing is more available, doctors have also found that there are some de novo cases of benign epilepsy, in which a spontaneous KCNQ2 mutation causes a more benign outcome, which in turn may be passed on to subsequent generations as BFNE.

So what does this mean?

Historically, the severity of the outcomes was labeled according to the mode of inheritance, with “familial” or inherited being associated with benign variants and de novo being associated with more significant encephalopathies. Now that the genetic basis for the different outcomes is better understood, it is clear that the specific variant of the mutation is more important than whether or not it was inherited.

Posted in Get Involved, KCNQ2 Strong